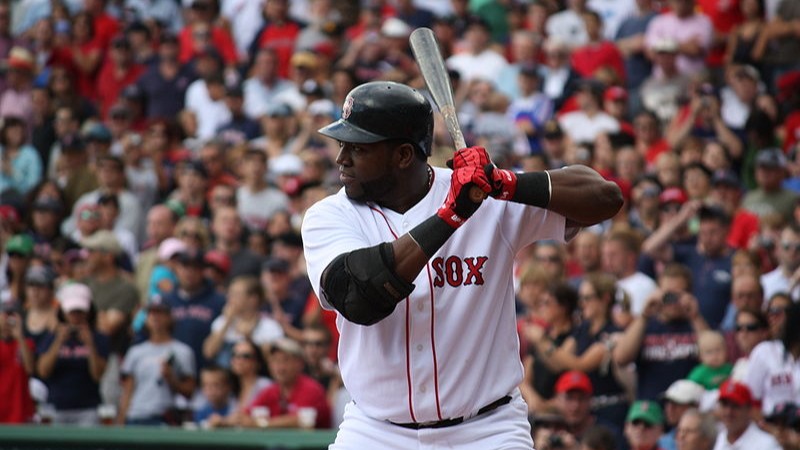 The Scariest Hitters of All-Time - Part 1

The Major League Baseball season came to an end last night with the Nationals securing the first World Series in the Nation’s Capital since 1924. As baseball enthusiasts endure the next five months, until the next meaningful baseball game, many will shift their focus to their work, families and the upcoming holidays.

The holiday season has a soft opening this evening (in the eyes of America's youth at least) as children across the country don their costumes and go trick-or-treating in their respective neighborhoods.

It’s always interesting to see what costume a child decides to sport, it provides a unique opportunity for them to express themselves. I have to hand it to kids these days, as time goes on their ideas become increasingly "creative."

My two-year old daughter kept it fairly simple this year, she’ll be rocking a dragon costume, but the roar she has to go along with it is ferocious. As we walk Harper around the neighborhood this evening, I’ll be keeping an eye out for those costumes that stand out. Secretly hoping that I’ll see a couple of kids dressed up like ballplayers. I would even settle for a ballplayer zombie. Anything, just give me a little more baseball.

Traditionally when people think of scary figures on Halloween - Jason Voorhees, Michael Myers, Freddy Krueger and other infamous monsters come to mind. However, at MaxBP we’re going to focus on a different kind of fear this Halloween - Scary Hitters. Every time these guys stepped to the plate, a pitcher's blood pressure rose and their palms began to sweat. Today we’ll take a look at the honorable mentions and number 6-10 in our rankings of "Scariest Hitters of All-Time."

We’d love your take on the list and any other players you feel are deserving of being the “scariest.” Those of you who comment or share this story will automatically "Enter a drawing for a special prize from MaxBP!"

The best all-around player in modern day Major League Baseball comes in at number ten on our list. Trout is a five-tool player, but without a doubt his biggest threat is as a hitter - a complete hitter with a career OPS of 1.000.

Throw in the fact that Trout is built like a linebacker on a full-ride scholarship to an SEC powerhouse and it’s safe to say the Vineland, New Jersey native strikes fear in the hearts of opposing pitchers.

The eight-time All-Star, two-time MVP and former Rookie of the Year is a sure-fire first ballot Hall of Fame selection. Why else would someone be offered a $430 Million contract?

The man with one of the sweetest swings in the history of the game may not have been as physically imposing as some of the other guys on this list, but he could swing it with the best of ‘em.

It looked as though “The Kid” was on his way to breaking a number of career power records, but injuries derailed those hopes in the latter part of Griffey’s career.

Griffey’s majestic play earned him 13 trips to the All-Star Game, four AL home run crowns and an MVP. In 2016, Griffey earned his rightful place in Cooperstown, receiving 99.3% of the votes.

“Big Papi” is a legend in Boston. From his role in the Red Sox’s comeback in 2004 against the Yankees to his moving speech after the Boston Marathon Bombing - you’ll be hard pressed to find a more beloved figure in New England.

The Dominican slugger was a 10-time All-Star, three-time World Series champion and won a World Series MVP during his illustrious career.

Ortiz retired from baseball in 2016 with a total of 541 home runs. His number 34 has already been retired by the Red Sox, it won’t be long until his enshrinement into Cooperstown.

The right-handed slugger stood at 6’5” and weighed in at 245 lbs. Even if he couldn’t "hit a lick," it would’ve been intimidating facing McGwire.

The Pomona, California native broke onto the scene with the Oakland Athletics in 1987, setting a rookie home run record in the process with 49 dingers. "Big Mac's" pinnacle season came in 1998 when he eclipsed Roger Maris’ single season home run record of 61, demolishing the record with an astonishing 70 home runs.

When you look up the longest home runs in MLB history - McGwire's name peppers the list - he hit more than 10 home runs 500+ feet in his career. McGwire would likely be ranked higher on this list if it weren't for his ties to steroid use.

The distance of Mickey Mantle’s home runs is the stuff of legend. Depending on who you ask, Mantle hit home runs anywhere between 600-feet as a 19-year old in an exhibition match against USC, to 565-feet at old Griffith Stadium, and that’s not even accounting for all the blasts he hit off the facade at Yankee Stadium.

Mantle produced a .298 average in his career, hit 536 home runs and he could do it from both sides of the plate. His numbers led to a Hall of Fame induction in 1974.

“The Mick” was a 20-time All-Star, seven-time World Series champion, three-time MVP and won the AL Triple Crown in 1956. He is one of the most beloved New York Yankees in franchise history.

Have any qualms with our selections thus far? Who deserves to be in the Top 5? Check out the tomorrow's blog for the Scariest Hitters of All-Time, and Enter a comment or share the article for a chance to win a special prize from MaxBP!

How to Adjust the Eyes During an At-Bat

There are varying theories on where a batter should focus their eyes during an At-Bat. The hat. The...
Read More

If a ballplayer is notorious for being a “dead-pull hitter” and is aiming to start using the entire...
Read More

The Scariest Hitters of All-Time - Part 2