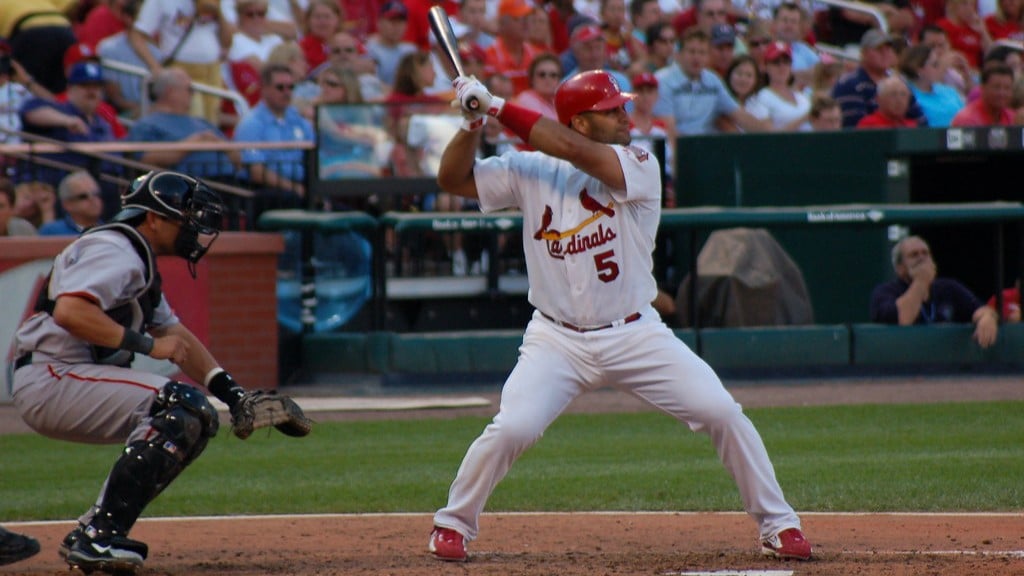 One look at the back of Albert Pujols’ baseball card and any baseball enthusiast can agree - the Dominican born slugger is a first ballot Hall of Famer.

The numbers jump off the cardboard, equally impressive from a contact and power perspective, as Pujols has put together one of the finest resumes of this generation. The power numbers include 656 home runs and 661 doubles, including league leading campaigns of 47 (2009), 42 (2010) and a career high of 49 (2006). The contact numbers included 3,201 hits, a .300 career batting average and a league leading .359 average in 2003.

Anyone who questions the type of impact Pujols had during his time in St. Louis, can venture back to his rookie season in 2001. The Cardinals faithful were still smitten with another power hitter, Mark McGwire, who three years earlier had taken Major League Baseball by storm with a single season record 70 home runs.

McGwire’s encore performance in 1999 included a 65 home run effort, but by the time 2001 rolled around, “Big Mac” was merely a shell of his former self. While McGwire maintained respectable power numbers (29 home runs and 64 RBI in 97 games), he struggled to put the bat on the ball consistently as he slipped to a .187 batting average and struck out 118 times in 364 plate appearances.

Meanwhile, Pujols was tearing the cover off the ball (.329 BA, 37 HR, 130 RBI) and the baseball writers honored him as the unanimous NL Rookie of the Year. Just like that, Pujols (who also finished fourth in the NL MVP voting) was the new face of the St. Louis Cardinals.

For the next decade Pujols led St. Louis to heights that hadn’t been reached since the post Stan Musial teams of the 1960’s. That group of Cardinals won the World Series in 1964 and 1967, while the legendary Musial’s last campaign was in 1963.

The Pujols-led Cardinals were equally as impressive, as they defeated the Detroit Tigers in the 2006 World Series and the Texas Rangers in the 2011 World Series. Along the way, Pujols collected three NL MVP awards (2005, 2008-09), nine All Star selections and two Gold Glove awards. The kind of career that garners serious "statue outside of the stadium" interest.

Although Pujols has continued to be an effective hitter as a member of the Los Angeles Angels, undoubtedly his glory days were as the leader of the Cardinals. So, let’s take a look at that swing that yielded such incredible results in the 2010’s, when Pujols consistently batted over .300 with elite power and was one of the best players in Major League Baseball.

When looking at Pujols’ swing with the naked eye, the first thing that is noticeable is the ease with which he plays the game. The 6’3,” 235 lb. slugger never seems to be pressing or over swinging, but rather practicing the fundamentals that he has worked diligently to develop, while letting the muscle memory do the talking.

Another fascinating thing about Pujols (particularly during his prime years with the Cardinals) was the way he seemed to slow the game down. No matter the pitcher, pitch type or location - Pujols always seemed to find the baseball with the barrel of the bat - with relative ease. Undoubtedly his large frame provided Pujols with the ability to have outstanding plate coverage, but as we know that doesn’t always equate with hulking, muscle bound ballplayers.

I believe the reason why Pujols was able to hit so effectively and consistently was due to his sound mechanics. One look at Pujols swing and it’s easy to see that there isn’t a whole lot of wasted motion there. He's the classic "Gentle Giant" who wasn't obsessed with hitting the ball a mile, but was more concerned with utilizing a well developed plan of attack. This begins with his stride, that of the rotational variety, which features little to no stride whatsoever.

Pujols core mechanics are equally impressive as he utilizes a smooth rotation of the hips to allow a prolonged orbit through the strike zone and toward the baseball. From the point of contact through the completion of the swing, Pujols features a majestic and effortless follow through, a major factor in producing backspin on the ball and contributing to his 656 career home runs.

The baseball world may not see another Albert Pujols for a very long time. However, bigger, muscle bound hitters should take away several features from his swing to improve their own technique. By developing fundamental muscle memory and featuring little to no wasted motion in their swing mechanics, even a powerful slugger should have the ability to hit for a consistent batting average.

Tony Gwynn was the purest hitter of his generation. Perhaps ever. Gwynn was nearly impossible to...
Read More

Soft Toss a Great Way to Go with the Pitch

The next time you are participating in some soft toss drills with a training partner, try this...
Read More

Don't Be Afraid of a Little Gas

Former Boston Red Sox legend Ted Williams once said, “You have to hit the fastball to play in the...
Read More