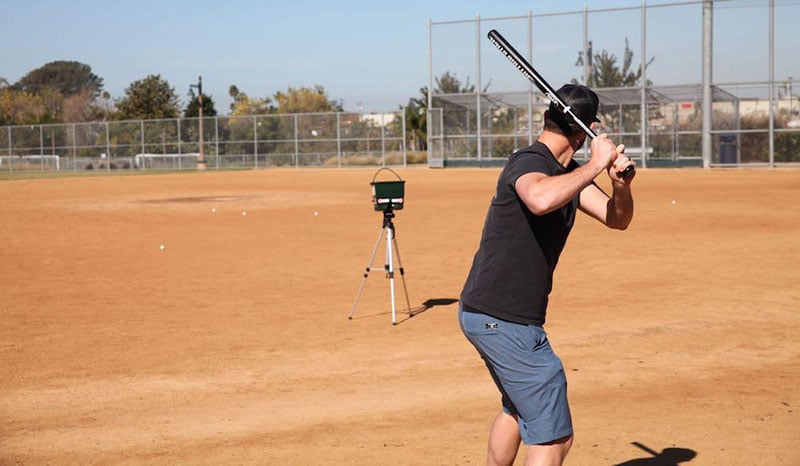 What MaxBP Customers Are Saying

Published by Coach Neil on Jun 11, 2019 3:39:00 PM
"I watched helplessly from the first base coaches box and could see the pain, frustration, and total dejection on my son's face as he walked back to the dugout after yet another strikeout.

It was the summer of his freshman year in high school and he was playing Babe Ruth baseball and Junior Legion baseball. He was struggling, especially defensively at shortstop, during his Babe Ruth season, so much so that he was almost ready to give up. His struggles in Junior Legion were tearing him up so I decided it was time to purchase a MaxBP Pitching Machine. While I was hopeful it could help with his timing and eye-hand coordination, I was not prepared for the all the great results we achieved.
The machine arrived with only a couple of weeks left in his season and we put it to use right away. He struggled. He improved. And he improved some more. The strikeouts which had been happening at an alarming rate began to decline sharply. In his last at-bat of the summer, he got his only hit. His stats for the Junior Legion team would leave most coaches believing he was never going to be a varsity player. He was 1 for 23 with 13 strikeouts. What he did have was a great work ethic and the MaxBP machine.
He practiced regularly for the rest of the summer and the following spring with the pitching machine. The varsity coach, who had also been my son's summer Junior Legion coach, wanted to see if he could hit so he played every inning of the JV season. I give your machine a tremendous amount of credit for his turn around. He hit .333 with a .404 on-base percentage and a .840 OBP. There was never a question about his defense, but now he was hitting.
He continued to use the MaxBP Pitching machine and this year he was the starting shortstop for the varsity team. The team is currently entering the state playoffs and finished second in their league playoffs. He was just named second team all-conference at shortstop and led our team in BA (.407), OBP (.492), RBIs (14), Quality At Bats (40), QAB % (58.82), and BA w/runners in scoring position (.474). In 68 plate appearances and 241 pitches seen he only swung and missed at 3 pitches. Despite his small stature (5' 8", 140 lbs) he is beginning to draw the attention of college coaches at some of the top Division III schools here in New England. While he has always been athletic, it wasn't until he started using your pitching machine that he became a great hitter.
One of his best friends started using the machine with him this year. That player hit lead off and batted .357 with a .456 OBP. Last year that same player while on the varsity team only hit .208. Did maturity have anything to do with their success? Probably. Watching them hit I know the MaxBP pitching machine had a tremendous impact on their timing, eye-hand coordination, and vision. I can't thank you enough."
Chuck B.
Portland, Maine

Want to let us know how the MaxBP is helping improve your or your players game? Give us your feedback today!
Tags: Training, Small Ball, Reaction Training
Back to Blog

Why Paul Phillips is a firm believer in MaxBP

Baseball is a game of precision and timing. Particularly for the person “under the microscope” -...
Read More