Think about the instrumental part our eyes play in our ability to perform a task - in everyday life. Our eyes communicate with the brain, which communicates with the body. Without this ebb and flow we would be lost. Sports aren’t any different, the athletes who endure this eyes, brain and body process the most effectively are the most successful.

In most cases, athletes are facing the fastest velocity they’ve ever seen from one level of competition to the next. This is particularly true for athletes fortunate enough to advance to regional, national or international competition. How does an athlete prepare for such a tall task? It all starts with vision training, and MaxBP offers velocity and breaking stuff to match the stiffest competition out there.

Tracking is one of the most underrated drills in all of sports. Whether it be hockey, cricket, baseball, or lacrosse - following an object with the eyes at high speeds is an effective practice. No matter if an athlete is standing or sitting, maximum strength or injured - tracking is an amazing drill for vision. This particularly true for athletes having trouble with a ball with a little wrinkle in it. Facing a pitcher with incomparable off-speed stuff? Or maybe your a goalie that is have trouble with a moving puck. No worries! The MaxBP Pro Machine features curve ball, cutter and slider options with a right-handed and left-handed trajectory. This will prepare your team for even the nastiest breaking stuff.

MaxBP’s small ball concept (training with golf sized wiffle balls) and user friendly portability provide teams and individuals with an unparalleled competitive edge. The vision training that athletes will experience with MaxBP is a game changer, and to experience the best results, a hitter should follow the tutelage of the Harrison Family and their Slow the Game Down (STGD) Vision Training Tools - some of the pioneers in vision training.

MaxBP is proud to be partners with Slow the Game Down (STGD) Vision Training Tools, which provides all athletes (injured or not) with a variety of opportunities to develop superior eye-mind-body reactions so your game speed performance will be enhanced. These products include strike zone locators, jelly bean colored wiffle balls, Eye-Trac and visual performance training tools. 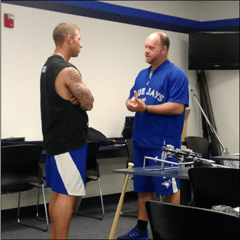 Ryan Harrison and his father, Dr. Bill Harrison, have been practicing the methods of the "Slow The Game Down" for over 40 years - from George Brett in 1971 to AL East Champions Toronto Blue Jays in 2015 and the World Series Champion San Francisco Giants in 2010, 2012 and 2014.

The Harrison's believe "everything you do in your sport begins with what you see.can help athletes develop superior eye-mind-body reactions so that their game-speed performance will automatically be enhanced. Numerous critical skills, all visual in nature, underlie an athlete's ability to be a good as they can be."

If athletics were all about being the best physical specimen - Dwight Howard and Gabe Kapler would be in the Hall of Fame - while Drew Brees and Babe Ruth, would not. As it stands, Brees and Ruth is each a legend in their respective sport - despite their physical shortcomings. The reason you ask? Because we’re talking about sports, not a fitness competition - mental and visual abilities are a vital factor to success.

It’s safe to say that “what” makes an athlete prosperous today is more complex than ever before. Physical capabilities are instrumental, but an athletes’ visual and mental capabilities are equally imperative. Train like a 21st Century athlete and consider all three athletic elements - eyes, brain and bodies - when allocating your practice time. If an athlete can capture this harmony between the mental, visual and physical components of their sport, they are well on their way to becoming an elite player.

How to Adjust the Eyes During an At-Bat

There are varying theories on where a batter should focus their eyes during an At-Bat. The hat. The...
Read More

When I was growing up, the concept of vision training in athletics didn’t exist. In fact, the only...
Read More

The best athletes in every respective sport have a knack for making the game look easy. Often times...
Read More