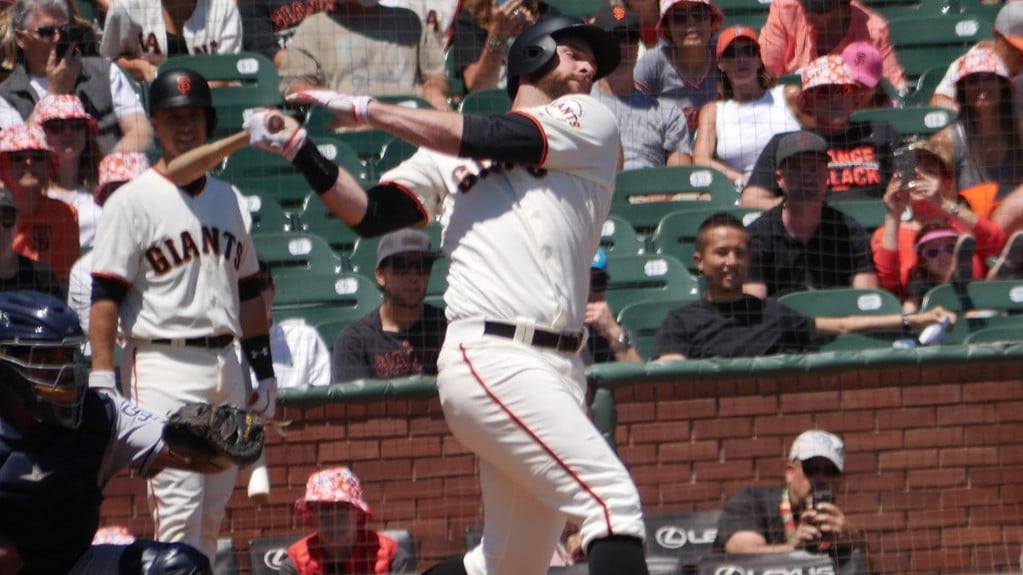 Stayin' Alive! The Art of Fouling Off Pitches - with Brandon Belt

It was one of those beautiful moments in baseball - when all you could do was laugh. The announcers, the capacity crowd and both dugouts. Next the players on the field covered their smiling faces with their gloves, and eventually, even the two players battling it out could be seen smirking.

Those of us who witnessed San Francisco Giants first baseman Brandon Belt’s 21-pitch first inning at-bat on April 22, 2018 against Los Angeles Angels pitcher Jaime Barria should savor that memory. Not only because it was such a comical moment, but because of what we can learn from it.

1. The more pitches a batter can force in a long at-bat (and stressful pitches at that), the more damage it will do to an opponent’s pitch count. This is a good thing for the offense in the short term and the long term. It gives the offense a chance at putting a crooked number up on the board and will likely limit the pitcher’s abilities to throw deep into a ballgame.

2. The longer a hitter prolongs an at-bat the better off his chances will be to reach base successfully. By seeing more pitches a batter is able to see a pitcher’s entire repertoire which enables them to identify pitch type, speed and location more effectively. A marathon at-bat is also a huge benefit to the team as a whole. It gives the entire roster a better look at what their opponent is working with that day.

3. For those of us who enjoy baseball history - it was the longest at-bat in the modern Major League Baseball era. When Belt finally lined out to Angels’ right fielder Kole Calhoun, his 21 pitch, 16 foul ball, 12 minute at-bat was a record breaker; and although Barria may have won that particular battle, Belt had the better game - going 3-for-5 with a home run. Barria on the other hand only recorded six outs, allowing two runs and six baserunners in 2+ innings of work.

Without a doubt Belt’s at-bat had a major impact on the outcome of the game. The Giants got to the Angels’ bullpen early and they were the victors by a score of 4-2. But, let’s take a closer look at Belt’s at-bat and see how a hitter in training can learn to “battle” like a big league ballplayer.

That's the pitch-by pitch-breakdown of Belt's historic plate appearance. He faced fastballs, sliders and change-ups along the way, fighting off everything Barria had to offer. Foul balls down the right-field line, left-field line and some straight backs. We're talking a lot of souvenirs here.

The pessimistic fan (maybe of the Dodger variety) would say that Belt's at-bat was nothing special. Pointing out that a foul ball is just another strike and more importantly, the plate appearance goes down as an 0-for-1 in the box score. That's hogwash. Belt's at-bat was epic and it was instrumental to his team's victory.

In analyzing Belt's at-bat he was able to make some really impressive two strike adjustments. Belt was short and compact to the ball and featured very little shoulder rotation. He was also very balanced with a quiet lower body, enabling him to hit a variety of pitch types at different locations. If I were to guess, I'd bet that Belt's approach was to hit the ball back up the middle.

Belt's at-bat was not a mistake. It was a thing of beauty and ballplayers everywhere can learn from it. Athletes who put in the time, particularly with MaxBP’s small ball training methods, will be able to adopt a Belt-esque two strike approach. By training with golf sized wiffle balls at high speeds with a variety of pitch types, hitters will be battle tested and unflappable in a two-strike game situation.

So remember, the box score doesn’t always tell the story and sometimes the at-bat that decides a game results in an out. Develop into that two strike hitter that won’t go down easily. Be a menace to opposing pitchers. No matter who prevails in that plate appearance, you are putting your team in a better position to win the ballgame.

Sometimes Nate Denton has to pinch himself. Not only because he lives a blessed life with his wife...
Read More

Approach Every Pitch with an Opportunistic Mentality

One of the biggest hurdles for developing hitters is having the right mentality when they step into...
Read More