Say What? Setting the Record Straight with Babe Ruth

Over the years, there have been many famous baseball players who have contributed to the sports’ success. Players whose names are synonymous with greatness - Mays, Mantle, Gehrig, Musial, Bench, Aaron, Williams, DiMaggio - and many others. However, no player has ever rivaled the popularity or the “larger than life” persona of George Herman “Babe” Ruth Jr. 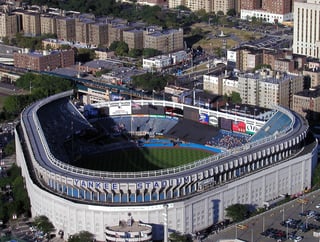 The Babe is undoubtedly the most famous baseball player and quite possibly the most iconic athlete in history. How else does one garner the nicknames “The Great Bambino” and “The Sultan of Swat?” That’s as legendary as it gets - hence the saying that the New York Yankees play in “The House that Ruth built.”

When Ruth had something to say, people listened, and it could be argued that we should still consider his words of wisdom - more than 70 years since he walked the earth. One of Ruth’s most famous statements on record, celebrates his passion for America’s Past Time, “Baseball was, is and always will be to me the best game in the world.”

It’s hard to argue to with Ruth’s famous quote. Although there are some great games out there and other sports have grown in popularity since Ruth’s playing days, it’s hard to imagine an athletic activity that challenges the mind, body and spirit like baseball.

Ruth’s genuine love for the game was expressed through his play between the lines. During the prime of Ruth’s career (1919-1931) he routinely hit 50+ home runs a season, while the games other premier sluggers during that era struggled to connect on 30 home runs. When the Manhattan, New York native retired from baseball in 1935, he held the single season home run record (60) and career home run record (714).

To this day, Ruth still owns the career slugging percentage record (.690) and career OPS record (1.164). He was a 12-time AL Home Run Leader, seven-time World Series Champion, an MVP, a batting champion and an RBI leader. As if Ruth didn’t do enough damage from the batter’s box, “The Babe” also made his mark as a pitcher - recording 94 career wins and a 2.28 career ERA as a starting pitcher.

The fact that Ruth re-wrote baseball’s record books is particularly profound considering the way his life began. He was born in Baltimore, Maryland on Feb. 6, 1895 to Katherine and George Herman Ruth Sr., both of German descent. The elder George Herman Ruth wore many hats to help provide food and shelter; however, times were tough for the Ruth family. Of the eight Ruth children, only George Jr. and his younger sister Mamie survived infancy. 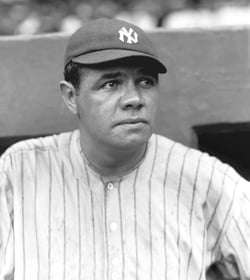 Although there isn’t much documentation about Ruth’s mother, Katherine, it has been published that George Sr. eventually owned a saloon in Baltimore. This business, and the lifestyle that came along with it, proved to be detrimental to Ruth’s childhood development, as he later admitted to being a juvenile delinquent and drinking beer at a young age.

To remedy the slippery slope that George Jr. was headed down, he was removed from his home and sent to the St. Mary’s Industrial School for Boys at the age of seven. Ruth would remain at St. Mary’s for the next 12 years, becoming educated, developing discipline and attaining work skills as a carpenter and shirtmaker.

It was during this time at St. Mary’s that Ruth was introduced to the game of baseball by the school’s Prefect of Discipline, Brother Matthias Boutlier. Ruth had a deep respect for Brother Matthias, and throughout his life he praised the positive impact and lasting impression the teacher made. According to some historians, Ruth even developed a running and hitting style that mimicked his mentor.

Life works in mysterious ways. It’s hard to imagine a world without Babe Ruth, but there’s reason to believe that would be the unfortunate case, if George Sr. wouldn’t have bought that saloon in Baltimore, Maryland and George Jr. wouldn’t have ended up at St. Mary’s with Brother Matthias.

Thankfully for baseball fans everywhere, destiny prevailed all those years ago, and Ruth became the timeless icon that continues to remind us that “Baseball was, is and always will be to me the best game in the world.”

Tags: History, Baseball, MLB, Say What
Back to Blog

Protect Your Head, You're Going to Need It

Injuries are bound to happen in sports, baseball and softball included. Whether it be a minor...
Read More

If you tune into the College World Series next June, chances are you’ll witness a number of scrappy...
Read More