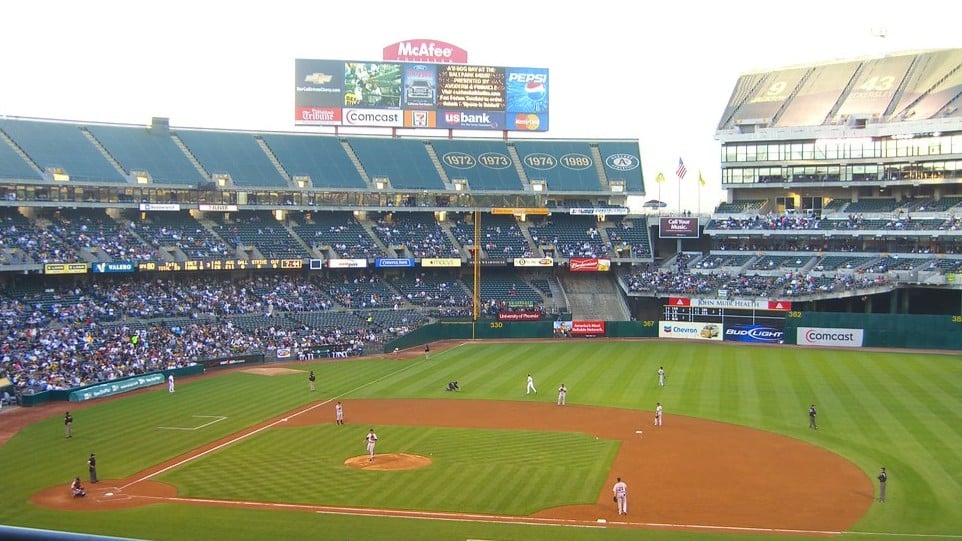 In a game featuring two of the lowest payrolls in Major League Baseball, Tampa Bay Rays stepped into the Oakland Coliseum last night and played the role of spoiler, winning the AL Wild Card match-up against the Oakland Athletics, 5-1.

The Rays and their MLB-low $60 Million payroll jumped on A’s starter Sean Manaea from the outset, stunning the Wild Card record setting crowd of 52,634 and earning a trip to the American League Division Series against the team with the best record in baseball, the Houston Astros.

Yesterday we discussed "Three key plays that shaped the NL Wild Card game". Now, let’s take a look at three moments from last night’s AL Wild Card game and discuss how those game changing plays can be simulated on a MaxBP Pro Machine.

It only took Yandy Diaz four pitches to show the Athletics and Sean Manaea that the Rays brought their own “A game” to Oakland Coliseum last night. On a 3-1 four-seam fastball on the outside part of the plate, Diaz smoked the pitch over the right field wall for an opposite field, lead-off home run.

Playing in only his second game since July 22, the Cuban born slugger went on to add another solo home run in the top of the 3rd inning, increasing the Rays’ lead to 4-0, and finished the game 3-for-4; however, it was the lead-off bomb that set the tone and provided a gut-punch to the Oakland crowd.

To recreate Sean Manaea’s 91 MPH fastball on a MaxBP Pro Machine, set the machine approximately 28 feet away from the hitter and configure the settings to high. At that point set the aim to the outer-half of the plate and practice driving the ball with opposite field authority like Diaz did in his consecutive jacks.

Tampa Bay veteran Charlie Morton struggled with his command in the early going, but was able to stifle Oakland’s hitters with an adrenaline induced fastball that hit 98 MPH on the gun and his signature curveball, which was typically in the low 80s range.

Trailing 1-0 in the bottom of the first inning the Athletics were able to load the bases against Morton, a rally that proved to be their best opportunity of the evening. Oakland second baseman Jurickson Profar stepped to the plate looking to do some damage; however, Profar was unable to deliver as he flew out to right field on an 81 MPH curveball from Morton.

To simulate Morton’s 81 MPH curveball on a MaxBP Pro Machine, set the machine approximately 25 feet from the hitter and configure the MaxBP to the righty curve + curve setting. By getting endless reps of this particular off-speed pitch, future hitters will be prepared to deliver the big hit in the moment that escaped Profar.

The Rays’ fifth and final run of the evening came on their fourth home run of the game, a solo shot by Tommy Pham in the top of the fifth inning. The designated hitter and former St. Louis Cardinals product smoked a 2-1 cutter from Oakland reliever Yusmeiro Petit, crushing the pitch to the tune of 418 feet over the center field fence.

Pham’s home run was the final blow in an impressive display of power and pitching by Tampa Bay, as the Rays dominant staff took over from there, shutting down the A's and closing the door on Oakland’s playoff aspirations.

To recreate Petit’s 85 MPH cutter on a MaxBP Pro Machine, set the machine approximately 28 feet away from the athlete in training and configure the machine to the righty curve + cutter setting. At this configuration an athlete can work on driving that cutter with power back up the middle and over the center field fence, just as Pham did on his round tripper.

When most people think of multi-sport athletes, they think of the traditional combinations of...
Read More

As the calendar flips to October, baseball fans everywhere can go about their day with a smile on...
Read More

Say What? Setting the Record Straight with Babe Ruth

Over the years, there have been many famous baseball players who have contributed to the sports’...
Read More