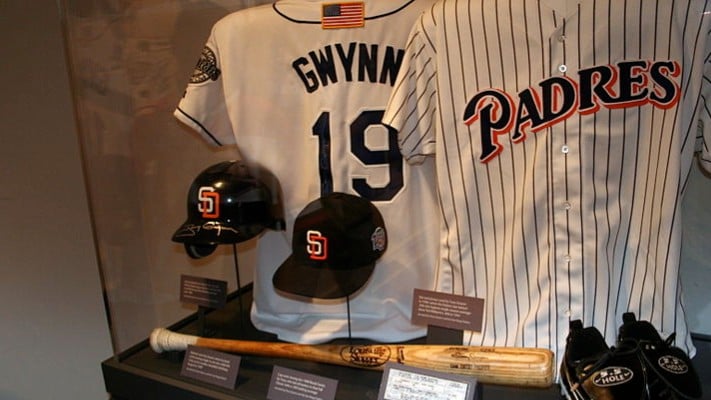 Tony Gwynn was the purest hitter of his generation. Perhaps ever. Gwynn was nearly impossible to strike out (434 K's in 10,000+ AB's) and he was immune to any kind of slump. His ability to hit the ball where it was pitched allowed him to spray line drives all over the field, making it look easy in the process. With the popularity of defensive shifts in today's game, it's comical to imagine how teams would have tried to defend Tony Gwynn. How do you defend a hitter who's capable of hitting any pitch at any location - all over the field?

Gwynn was born and raised in Southern California. He attended San Diego State University where he played collegiate baseball and basketball for the Aztecs. Gwynn was All-Western Athletic Conference (WAC) player in both sports, and an All-American on the baseball diamond. He elected to pursue baseball professionally after being drafted by the hometown Padres in the third round of the 1981 MLB Draft. It proved to be a wise decision from the outset, as Gwynn led the NL in batting average and catapulted the Padres to their first World Series appearance in 1984 (dropping the series 4 games to 1 to the Detroit Tigers).

The sweet swinging left-hander played 20 seasons in the Major League Baseball, all with his beloved Padres. He compiled a .338 career batting average, won a record-tying eight NL batting titles, was selected to 15 All-Star games and won seven Silver Slugger Awards. In the strike shortened 1994 season Gwynn flirted with a .400 batting average (finishing the campaign at .394), the beginning of four consecutive batting titles. In 1998, Gwynn led the Padres to their second World Series appearance (a 4-0 sweep by the New York Yankees). Mr. Padre was elected to the Baseball Hall of Fame in 2007, his first year of eligibility.

So what was it that made Gwynn so special as a hitter? It all starts with preparation. Whether it be in the video room or the batting cage, Gwynn outworked his peers. Gwynn's swing mechanics were always a priority, as he spent countless hours in the cage. As is the case with many legends, Gwynn was often the first player to arrive at practice and last one to leave. Gwynn is also credited as one of the pioneers of video study in MLB baseball. The long hours he spent in the video room at old Jack Murphy Stadium is the stuff of legend.

But lets take a closer look at the swing. The one that compiled statistics that may never be seen again. Gwynn is well known for his ability to hit the ball the other way, in his case as a left-handed hitter, to the left side of the infield. He compiled 2,378 singles in his career - the majority of which were presumably hit through the "5.5" hole (between the third baseman and shortstop). Gwynn referred to the "5.5" hole as his bread and butter in his book "The Art of Hitting;" however, he admits that he should have pulled the ball more, particularly early in his career - a lesson he learned through conversations with Ted Williams.

These conversations with the Splendid Splinter led to a change in philosophy in the latter part of Gwynn's career. He frequently pulled the ball and hit for more power, while still recording a high average. This led to Gwynn's best all-around season in 1997, when he batted .372 with 17 home runs and 119 RBI.

Considering the fact that Gwynn admittedly regrets not pulling the ball more often and that very few athletes are blessed with his superior hand-eye coordination and athleticism; hitters should proceed with caution when attempting the opposite field approach. Less talented players will find themselves hitting a lot of dribblers and lazy fly balls, while sacrificing their potential power numbers.

Gwynn's quiet shoulder rotation was a key component in his ability to hit the ball to the opposite field. You won't find many video clips of Tony Gwynn pulling off the ball (an issue for many over aggressive hitters). Gwynn was exceptional at being composed, patient and calm. He had a knack for staying inside the ball and decelerating his shoulder rotation, which allowed him to hit the ball sharply at impressive depths in the zone.

Gwynn was able to master this unparalleled approach because he is arguably the best contact hitter ever. His swing was honed to such perfection that it featured no extra movements. It was simple and repeatable. No doubt a link to the 1,000's of hours he spent in the cage.

Use Colored Balls for Vision Training

When practicing for a sport it is always important to apply a physical, mental and visual training...
Read More

The best hitters have the ability to recognize different pitches and deposit that pitch to their...
Read More

One look at the back of Albert Pujols’ baseball card and any baseball enthusiast can agree - the...
Read More