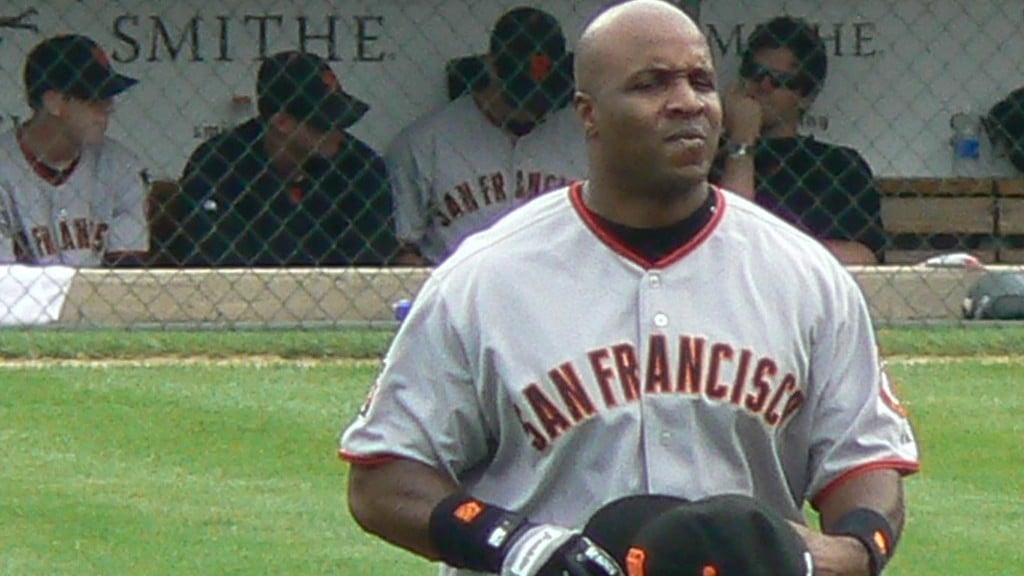 From the time Barry Bonds was a young boy, hanging around the Candlestick Park Clubhouse with his father Bobby, his godfather Willie Mays and Hall of Famer Willie McCovey - Bonds seemed destined for a career in Major League Baseball.

Born in Riverside, California, Bonds grew up in San Carlos and eventually attended Junipero Serra High School in San Mateo - where he excelled in football, basketball and baseball.

The left-handed slugger was especially dangerous on the diamond, recording a .467 average and earning prep All-American honors during his senior year of high school. Bonds’ achievements were impressive enough that his hometown San Francisco Giants drafted him in the second round of the 1982 MLB Draft; however, the two sides failed to come to terms on a signing bonus and Bonds opted to attend Arizona State University.

Although Bonds was stellar in his three seasons with the Sun Devils, posting a .347 batting average with 45 home runs, he struggled to coexist with teammates - an issue that would continue to plague him in his professional career.

Bonds was the most talented player on the roster during his tenure at Arizona State, including a record tying seven straight hits in the 1985 College World Series; however, his teammates actually voted to remove Bonds from the team at one point.

Despite the red flags surrounding Bonds’ attitude, the Pittsburgh Pirates selected the outfielder with the sixth overall pick in the 1985 Major League Baseball Draft. It didn’t take Bonds very long to make his mark in the big leagues, he was called up to the majors in 1986 and promptly hit 16 home runs and stole 36 bases in 113 games.

Bonds continued to produce power numbers and steal bases the next few season; however, he struggled to hit for average - recording batting averages of .223, .261, .283 and .248 in his first four seasons. Something clicked for Bonds in the 1990 season as he led the Pirates to a playoff berth, while hitting .301 with 33 HR and 114 RBI, to go along with 52 stolen bases. This prompted the Baseball Writers of America to present Bonds with the first of his seven NL MVP awards.

Bonds played two more seasons with the Pirates, winning another MVP award, and finishing another season as the runner-up, while leading Pittsburgh to a couple more NL East titles. However, Bonds and the Pirates were unable to overcome their nemesis, the Atlanta Braves, in the NLCS and failed to reach the World Series.

Prior to the 1993 season Bonds opted to part ways with the Pirates and signed the largest contract in MLB history at the time - Six years and $43.75 million - with the San Francisco Giants. The Bonds signing paid immediate dividends for San Francisco as the excitement helped build momentum toward a new stadium, the ballpark we know today as Oracle Park.

Bonds’ on-field achievements were equally impressive as he won the NL MVP award in 1993, while producing a stat line of .336 BA, 46 HR and 123 RBI. The Giants produced the second best record in Major League Baseball in 1993; however, a loss on the last day of the season in Los Angeles extinguished their playoff hopes. The Atlanta Braves (previously of the NL West) won 104 games and secured the division title. Most baseball experts believe this is what prompted Major League Baseball to create three divisions in each league and incorporate wild card teams into the playoff mix.

The rest of Bonds’ tenure in San Francisco was a roller coaster ride that Giants fans will never forget. The good times were exhilarating as Bonds won a total of four MVP awards with San Francisco, led the Giants to three playoff runs, a World Series appearance and broke the single season home run record (73) and career home run record (762).

Unfortunately, Bonds’ lowest moments are also difficult for baseball fans to erase from their memory. Some of these trying times included: altercations with teammates, a moody temperament with the media, and allegations of performance enhancing drugs. For the aforementioned reasons, Bonds has failed to gain much momentum for a Hall of Fame induction, despite that fact that he has one of the most impressive resumes in baseball history.

Most baseball enthusiasts agree that Bonds’ numbers are tainted because of the steroid allegations. If it weren’t for his ties to Greg Anderson and BALCO it’s presumed that Bonds wouldn’t have experienced the unprecedented success he enjoyed in the latter part of his career. With that being said, there is still something to be learned from one of the greatest players of his generation.

So, inconsistent attitude and steroid allegations aside, what was it that made Bonds so successful during a 22-year career that included: 14-All Star game selections, 12 Silver Slugger Awards, 8 Gold Gloves, 7 MVP Awards, the single season and career home run record, the career bases on balls record and the career intentional walk record?

The first thing that stands out is Bonds’ athleticism. Although Bonds may not be considered a five-tool player (he lacked arm strength), he was elite in the other four categories (hitting average, power, speed and defense). The proof of Bonds’ athleticism lies in the multiple MVP awards, gold gloves, home runs and stolen bases; including, a “40/40” season in 1996, before he presumably used performance enhancing drugs.

Bonds was a complete hitter with arguably the best eye at the plate since Ted Williams, but it was his swing that captured the imagination of baseball fans. Although Bonds’ swing may not have been as majestic as his counterpart in the American League, Ken Griffey Jr., or even his teammate with the Giants, Will Clark - Bonds’ compact swing was incredibly productive.

Utilizing incredible core strength and bat speed, Bonds’ left-handed swing was as quick and explosive as anybody who has ever played. The way Bonds attacked the ball and sent it into orbit was borderline violent. It’s difficult to compare Bonds’ swing to another baseball player, perhaps his friend and workout partner Gary Sheffield would be the most appropriate comparison; however, Sheffield batted from the right-side and was never quite on Bonds’ level.

In my opinion, the closest thing that I ever saw to Bonds’ compact, powerful swing was performed by athlete in a completely different sport - Mike Tyson. I recall watching “Iron Mike” in his prime, back when Pay-Per-View customers were getting hosed out of their money, as Tyson routinely dismantled his opponents in the early rounds.

Like Bonds, Tyson’s abilities were unmatched by his counterparts and his predecessors. He was truly a unique talent, with unfathomable power and explosiveness. Tyson was the type of athlete that rarely surfaces and leaves a spectator in awe. The footage of his violent knockouts are unparalleled to this day.

It’s no secret. Not everyone is born with the God-given talent of a Barry Bonds or a Mike Tyson. However, is it possible for an aspiring athlete to create a training regimen to improve their explosiveness and reaction time? Absolutely! But, it’s going to take some work.

MaxBP Reaction Training presents athletes with a unique opportunity to enjoy unlimited reps in the comfort of their own home. A high number of reps on a consistent basis is the most realistic way for an athlete to improve their reaction time, whether it be bat speed in the batter's box or in a different sport.

Take your game to the next level and be that athlete that strikes fear into the heart of their opponents. Develop a workout regimen that will promote explosive athleticism like Barry Bonds and Iron Mike Tyson.